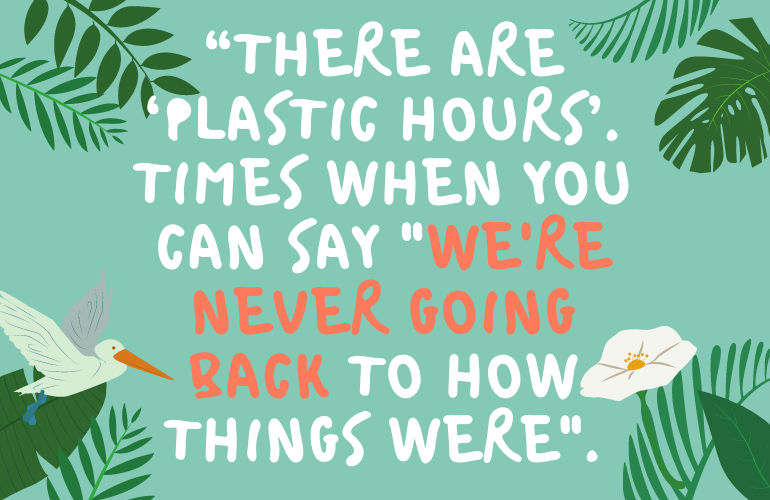 Some podcasts have so many good, quotable moments, you just need to hit pause and rewind and then sit down to transcribe. The podcast episode of Past Imperfect with Mary Portas, is that.

I really wouldn’t have imagined someone who worked in retail– of all things– would be so pro-community, so for small stores, so against what she calls “alpha male leadership”* (<–clicky for my note), and against overworking as a badge of honour. But it turns out it’s precisely because she lived so much of her career in the other direction that she’s come to this conclusion.

And the cute part is her change came about when her partner (she’s gay) gave birth to her second child. And she reflected on how different this child’s life would be from her oldest child. The times she spent working and HOW she spent working.

I tell you something as someone who works for herself, ran a company in two counties (streamlined when I got pregnant, cos the accounting alone was more than I could handle) works in tech, works in startups and has worked with creative agencies and a multinational corporation:

You realise that hustle culture wasn’t worth it. Not after a point.

But we’re being sold hustle as a lifestyle. As a virtue. As a never ending game of Mario where we expect to constantly level up or feel cheated or hard done by. That isn’t worth it. And it’s not even how it works in real life.

In real life, hustle isn’t always rewarded. Some of the hardest working and smartest people are struggling. While some of the most incompetent, decietful people are floated to the top (our beloved PM for example).

So let’s stop repeating this lie and adding an extra burden to those who get doors shut in their face repeatedly. Cos yeah, cream floats to the top, but so does scum. And we’re neither ponds nor dairy.

* (disclaimer: I would prefer she called it “toxic leadership” rather than assign it a gender, especially as we know women do perpetuate this culture as as well – but she is a boomer, so we have to expect some issues. Just know that each time that phrase comes up I mentally substitute “toxic leadership” in it’s place)

Really looking forward to hearing her own podcast on the kindness economy.

Published by The Healing Mom

I love unpicking the invisible threads that pull at our emotions and trigger behaviours. Especially as it relates to decision making, individual or group behaviour, and our mental health. As a digital product designer, I often funnel this knowledge into my work. I also like asking questions about how software design impacts our wellness, self-image, self-perception and interconnectedness. View all posts by The Healing Mom

Hi. I’m The Healing Mom. And this is where I post things that don’t fit on my insta.

I talk about my life becoming a first time high risk mom weeks before lockdown.

I also talk a lot about mental health, healing from anxiety, GAD and postpartum depression.

I also look at mental frames and beliefs that impact our mental health, and how our culture impacts our mental resilience and health.

The best way to get updates on just one topic is to subscribe to my newsletter. There’s no promotions in there. Just posts delivered to you by the category you chose.

My weekly roundup of the most interesting reads related to healing and emotional wellness is up on my blog (link in bio).
100 days sober! 🛑🍸🥂
A quote from the podcast “past imperfect” with Mary portas that’s stayed in my mind.
Introducing my very unscripted and almost zero production podcast, link in bio. Raw and authentic, right?
New blog post: link in bio. This is my personal story with the problems with maintaining self esteem and how self compassion (as hard as it was to learn) is working out better.
I talk about politics and culture a lot in my stories because politics, economy, sexism, ableism, racism, workism, hustle culture, late stage capitalism all contribute individually and collectively to a lot of our suffering.